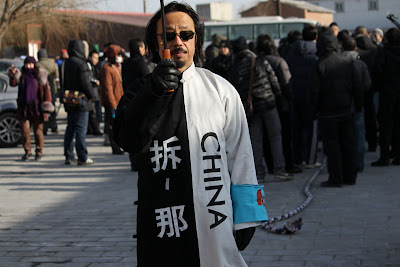 Warm Winter is a collaborative touring art exhibition involving artists from the city's 20 major art colonies. It started as a response to a particularly invidious demolition squad hired by real estate developers, but it has since become something much bigger.

This is why you should care.

In China, demolish-and-relocate (chai-qian, 拆迁) is commonly accepted as an inevitable consequence of the country's headlong rush towards urbanization, i.e. "progress," without regard to individual costs. Most of the time, the evictees have no voice and no means of fighting back -- and they always lose -- since typical leasing contracts have a force majeure clause that excuses landlords from compensating tenants.

These artists, however, do have a voice, and what makes this story significant is that they're steadily gaining listeners.

The artists have staged three shows so far, with the next one on January 29. On January 12, a group of thugs incited violence that was witnessed by a large local media contingent (the incident made the front page of The Beijing News (this picture)).

I was at an event last Thursday (see pictures, below) at Zhengyang Creative Art Zone -- in many 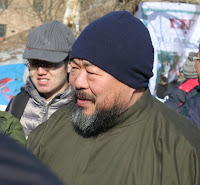 ways the center of this conflict -- which was also attended by the firebrand Ai Weiwei, who told the assembled media, "Human rights must be won by the people."

"Our society should have common sense," he continued. "That a country constantly speaking about its own formation and future would relentlessly destroy its self-built art districts is a farce. (This may happen) in North Korea, sure. But constantly demolishing people’s homes? Before ‘49 (the formation of New China), this sort of thing might have happened.

"They’re even going to demolish Tiananmen. Zhongnanhai is next.

"They might demolish anything. We're preparing ourselves. Yesterday we searched for ways to oppose tanks." Laughter from assembled media.

"Did you find a way?" a journalist asked.

"Not yet. This I can’t talk about here. You’re going to get me run out."

He added, "Artists are soft. Today they’re operating within their own comfort zone. I don’t feel like there’s much significance in this (show)."

He then likened the artists to "masturbators" who "crawl under 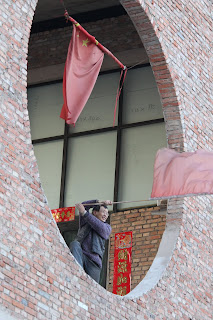 the blankets to do it."

"I don’t think there’ll be much upshot," he said.

Several hours later, artists from the show marched about 2 km to Jiangfu Art Zone, where the plan was to meet up with others for a dinner. Along the way, shopkeepers poked out of their stores as the artists chanted, "We're exercising our bodies to protect our homes!"

Along the way, the artists were cheered by a mother with her small child and by a man standing in an abandoned building, waving a red flag underneath a tattered Chinese flag. 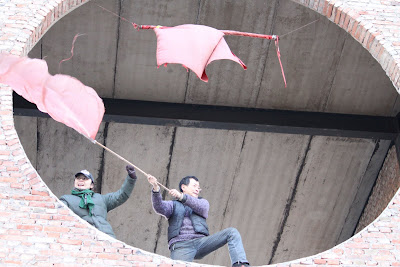 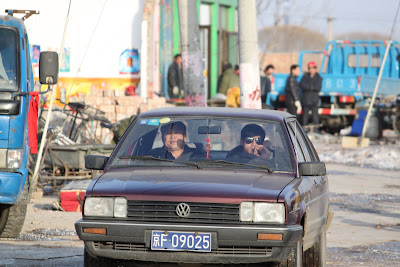 Watched us during the event, too.

But when the artists reached their destination, they were in for a surprise: Jiangfu's residents -- artists who successfully petitioned the city government last year to preserve their district -- turned the marchers away out of fear of formal retribution. The artists were denied the confrontation with authorities they were angling for.

"Successful artists don't want trouble, and the Jiangfu artists are 'successful,'" said artist Zhou Yongyang. He was apoplectic as we drove away.

The rift forming between the artists illustrates another reason tenants face an uphill battle in housing disputes. Those with nothing to lose (like Zhou, who lost his home to developers in 2005) are usually outnumbered by those who prefer deference, like the artists of Jiangfu.

But at the center of it all, the issue that needs addressing is China's unjust property rights laws and what the government might do about them.

In March's National Committee of CPPCC plenary meeting, national leaders will discuss whether to reform its demolish-and-relocate laws. (Incidentally, Warm Winter will conclude just before then.) There will be no shortage of lobbyists. "We're not anti-government; we support the country's policies," one of Warm Winter's co-organizers told me in a 90-minute interview last week. "But these methods are inhumane. They deprive us of our most basic living requirements." The artists, like most Chinese petitioners, are hopeful (perhaps naively) that if they "make things big, the government will intervene."

But intervene on whose behalf? 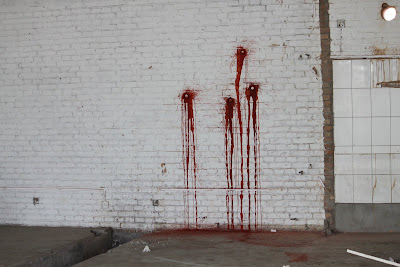 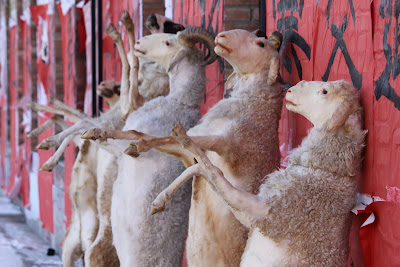 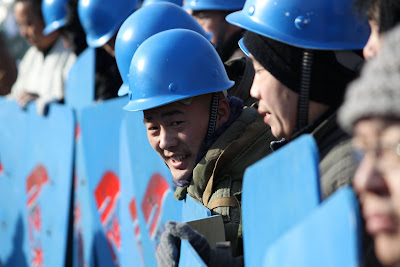 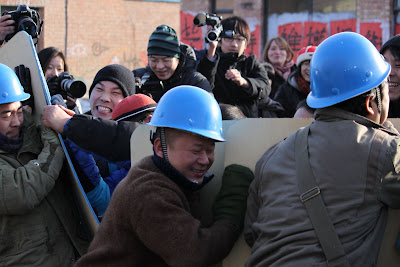 Warm Winter has received considerable local press (including English-language Beijing Today), but as yet nothing from international media -- duly noted by the Newswatch blog -- and my pitches to CNN, The New York Times, London Times, Guardian and Observer have been summarily ignored (Slate at least wrote back). The editors' approach -- wait-and-see -- is understandable, considering the number of chai-qian incidents and minor protests that spring up. It may well require a nail-house type incident to attract the big media companies.

And that type of incident is what Ai Weiwei was saying he wanted -- what Zhou, in fact, wants -- and that there are people -- influential, well-known -- who are actively trying to incite disorder is what makes this story worth following. Stay tuned.

Hi,
I'm journalist for www.observers.france24.com and i'd like to write a post about the Warm winter movement.
Did you take these pictures ?
Do you think that we could talk on the phone about it ?
Let me know.

Hi Ségolène,
Yup, these pics are mine. Let me know how I can get in touch with you...

BlueHost is definitely one of the best hosting company for any hosting services you might need.