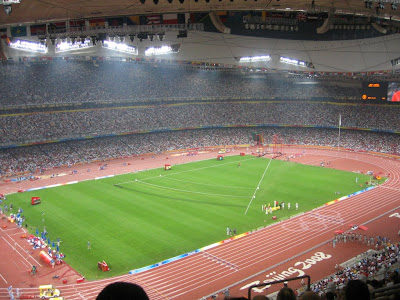 The track where Liu Xiang will not compete.

My Monday ESPN Beijing Bureau post dealt with Liu Xiang. At this point not much more needs to be said, but if I can add just one thing...

Later that night, at the conclusion of the day's track and field events, the Bird's Nest's giant screens showed a highlight package that included Liu Xiang's face. First it was from the morning, his expression contorted with pain and the initial stirrings of unspeakable disappointment. A little later he appeared again, this time as part of a montage set to the Olympic song "Forever Friends." It was an image everyone here is familiar with: the moment the hurdler crossed the finish line in Athens, his eyes lighting up as it dawned on him that he'd just pulled the biggest shocker in his country's sporting history, exertion giving way to pure jubilation. It was a poignant moment, and one people here will want to remember. Who knows when we'll see it again?

Liu Xiang's problematic heel has been bothering him for years, and it may not get better. Anyone who runs knows how painful a bum heel can be. Now imagine trying to run at world-class speed while hopping over a set of ten hurdles, landing on your heels each time. When people say Liu Xiang was in "excruciating" pain, I believe it.

The question no one here is asking but everyone should be is, Will Liu Xiang ever be the same? Will he ever contend again at world championships? Will he be a medal contender in London? I'm not so sure. At 25, his career may be over. He gave China one incredible, unforgettable moment -- that instant he crossed the finish line in Athens -- and now he may have to take his leave. It's too early. I understand why people here want more: Liu Xiang is a once-in-a-lifetime athlete, the sort who has a combination of charm, intelligence, dedication, patriotism, good looks and natural ability. When will China get another Liu Xiang? For that matter, when will China get another male athlete able to compete with the big boys in the glamorous track and field events?

It's a question no one's asking, and for good reason: we may not want to know the answer.