My ignominious streak of being late with the news continues, but as a former third-place finisher in a Kansas City youth ping-pong tournament (let's just say there weren't that many participants), I have to make mention of this... 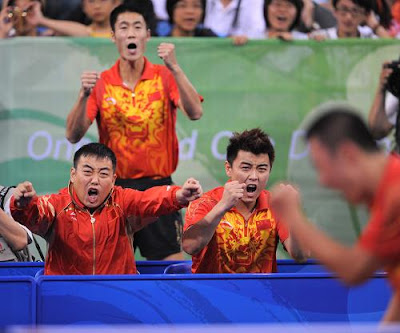 Both the Chinese men's and women's table tennis teams won the gold medal this week, with the women beating Singapore 3-0 Sunday and the men trouncing Germany by the same count. China has captured 18 of 22 table tennis golds since the sport was introduced in the Olympics in 1988, a feat that's absolutely incredible when you consider how many countries play ping-pong and how little margin of error there is at the game's highest level. When the Chinese need to be perfect at the table, they are -- almost without exception.

I'd also like to say that watching ping-pong on TV is absolutely awesome. I pity the viewers in America who just aren't getting much coverage -- or getting it on MSNBC at 4:30 a.m. During one point in a Japan-Germany semifinals match, a Japanese player returned a shot with his paddle over his head -- the spike came in that hard -- and ended up winning the point. I was out of my seat and agape.

The "beating Singapore" link is a recommended read, and not just because it makes mention of cutie Li Jiawei, a native Beijinger who emigrated to Singapore because she didn't make the Chinese national team. She's not alone: her two teammates on Singapore's team are also Chinese. To give you an idea of how difficult it is to make the Chinese squad: the world's top five female ping-pong players are Chinese (Li Jiawei comes in at No. 6), as are the world's top four men, according to the International Table Tennis Federation's August rankings. Let's just say that "wall of champions" in Peking University is filled with Chinese names. 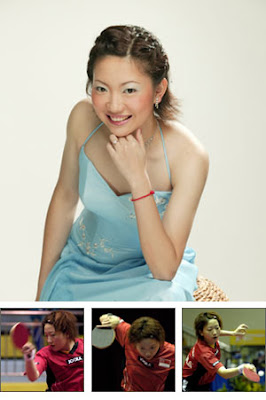 POSTSCRIPT: Wired on "the truth about table tennis."
Posted by The Tao at 1:28 AM